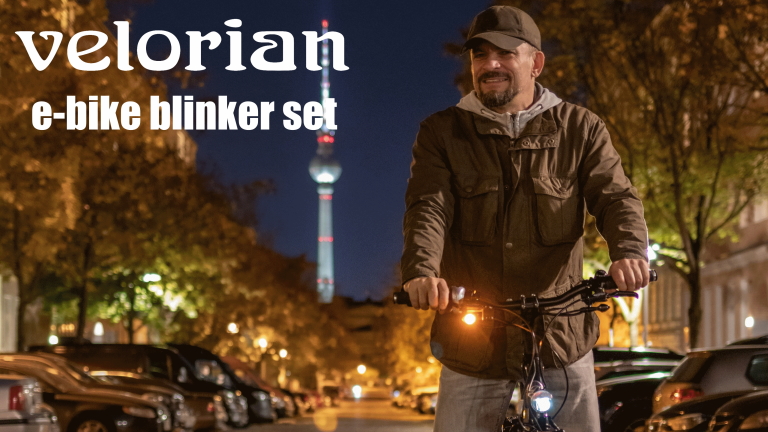 The safety of cyclists in road traffic is a frequently criticised topic, especially in large cities. In addition to many external influences such as the street scene or the constantly increasing traffic, there is also potential for optimisation in cycling and cyclists themselves. High-performance e-bikes have long been established in everyday road use. Berlin-based velorian GmbH proves that the electrical energy of bicycles can be useful not only for fast and comfortable riding, but also for more safety on the way from A to B. After more than three years of development and testing in the Berlin urban jungle, the young company can now present its practical "velorian E-Bike Blinkerset", which interested parties have been able to support since 29 May 2020 as part of a crowdfunding campaign via Kickstarter.

Everyone knows the classic turning signal of cyclists: stretch out your arm as far as possible in time. This also means taking your hand off the handlebars and riding one-handed over a longer distance and for a longer period of time, while at the same time looking over the shoulder and having all other road users in view. A real multitasking performance, which often tempts to do without the hand signal. In addition, the classic hand signal loses much of its perception by other road users at dusk, in the dark and in similar poor visibility conditions.

Indicators on the bike: Strong demand especially in urban centers

The idea of the velorian e-bike turn signal set matured on the basis of countless such experiences in the daily cycling routine of an experienced Berlin road user. Behind velorian is Eckehard Bahr, who, as a graduate engineer, was unable to find a previously existing, satisfactory solution for safer turning in the city. „For a long time I have been riding my bike every day in the Berlin area and the need for useful accessories for more safety grew very quickly in me. As a person with an affinity for technology, aspects such as reliability, durability, stability and compliance with legal requirements were important to me, as well as an attractive and discreet appearance.“, describes Bahr.

Suitable features thanks to practice-oriented development

With technical know-how and a lot of experience as input for the development, Bahr has considered all necessary details for the greatest possible practical suitability of the e-bike indicators. The individual components are high-quality, motorcycle-proven mini LED indicators which, in combination with newly developed control electronics and suitable mounting material, fit every e-bike and e-pedelec. The bicycle battery supplies the system with power and the indicator set is also designed in accordance with the applicable road traffic regulations. It can therefore be used as a retrofitted accessory, also as an alternative to the hand signal. The same applies to electric cargo bikes and electric recumbents on which the indicator set can also be mounted. An sound signal for the driver, a warning flashing function or an increased frequency of flashing and sound signals in the event of a defect in one of the turn signals underline the practical suitability of the development.

Getting the turn signal set on the road together

More than three years of ambitious development work have been invested by velorian GmbH in the E-Bike Blinkerset. Thanks to additional funding from the state of Berlin, the first presentations at German bicycle trade fairs in 2019 were able to arouse great interest. The velorian team is now ready to start series production of the E-Bike Blinkerset and has been calling for support with a crowdfunding campaign since 29 May 2020.